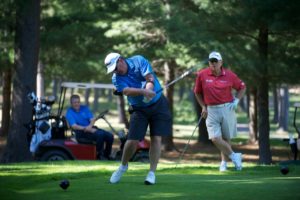 Eric Dutt began playing golf in Las Vegas at the age of six, working at a golf course at the age of ten and has been in the golf business since the age of 21 after playing collegiate golf at Purdue from 1977-1981 where his team won the 1981 Big Ten Collegiate Conference Title and Dutt won three individual titles in his four years as a Boilermaker. Dutt won the Nevada State Amateur at the age of 17.

His golf career since that time includes Tournament Operations Manager for PGA Tour, LPGA Tour, and PGA Senior Tour events in Las Vegas from 1985-1995 and as the General Manager who opened the Badlands Golf Club in Las Vegas in 1995 where his team generated 51,000 rounds of golf in its first year of operation. He served as Director of Marketing for Walters Golf overseeing all marketing/advertising for three Las Vegas golf courses from 1998-2000.

In 2000 he was tasked with taking over Rio Secco Golf Club for Harrah’s Entertainment, a high-end resort course in Henderson, NV that was generating 13,000 rounds per year and losing over $2M each year. Within 18 months the course was at break even. In 2007 Rio Secco ran 39,000 rounds through the course with EBITDA of $2.1M. In 2005 Harrah’s acquired five additional golf courses in their acquisition of Caesars Entertainment, one of which, Cascata, was located just outside Las Vegas. Dutt took over Cascata in 2005 which at that time was losing some $4M yearly. Cascata has been named a TOP 100 Golf Course by virtually every golf publication in the country since and the Zagat Survey voted Cascata the best “Overall Golf Experience” in the United States in 2009. He currently oversees all golf operations for Rio Secco, Cascata and the Butch Harmon School of Golf for Caesars Entertainment who own and operate numerous hotel properties in Las Vegas. He frequently is asked to assist Caesars with its golf operations in Atlantic City, Biloxi, and Tunica, MS, Southern Indiana and its golf course and Butch Harmon School of Golf facility in Macau.

I have had the privilege of working with Eric Dutt and his courses in a number of business dealings. He has always delivered on everything he promised and more often than not, beyond what was agreed upon. Eric is one of the most respected, knowledgeable, innovative and trustworthy individuals in the golf industry. His course operations at both clubs is superior to most clubs for which I am professionally involved on a day to day basis!

In my some forty years in various areas of golf management, from tour operations and golf course development to association management, I have found Eric to be the most knowledgeable person in the golf management industry, with experience in all areas of club positioning, marketing, and day to day facility management. He has a unique perception of the public golfer demographic and has demonstrated how to access that market appropriately. I trust his counsel implicitly!

Eric is one of the best golf managers I have had the privilege to know and work with while he managed the operations at both Rio Secco and Cascata, both courses in which I designed. We also worked together on the design I did at Danzante Bay in Mexico and he provided valuable expertise to the project. Anybody would be well served by Eric’s talent in the golf industry!

I have known and had the opportunity to work with Eric Dutt on a professional level for over twenty years. Eric is a trusted, well respected of the golf community and I do not hesitate to recommend Eric as an experienced and trustworthy professional. Eric is one of the few individuals who is well versed in golf course maintenance, clubhouse food/beverage, and golf shop operations. This is unique!

I consider Eric one of the most knowledgeable individuals in the golf industry as it pertains to golf destination marketing. I have personally placed many events at the courses he manages and “to a tee” found the customer service, course conditions, and overall experience superior!

I had the opportunity to work with Eric and his teams on the Wendy’s Three Tour Challenge. I found Eric to be knowledgeable and straightforward, with a keen understanding of the value of partnership. He was quick to grasp the scope of the event and knowledgeable to build an operational plan to support. In my role with the event, I had the occasion to work with the management teams of both Rio Secco and Cascata. I found both staffs to be hard working, dependable and perhaps most importantly, se…

I worked closely with Eric in planning and executing numerous events on behalf of Tiger Woods and his various business entities. Eric is organized, efficient, and extremely competent. The ability to think quickly on his feet and handle various situations sensibly is another of his positive qualities!

I’ve worked on various projects with Eric and he is thorough, creative, business savvy and professional. You can count on each task being completed on time and in an excellent manner.